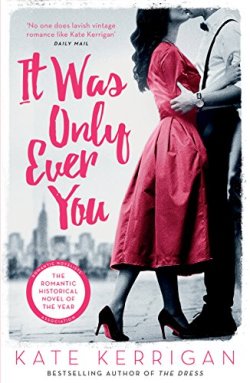 WINNER OF RNA HISTORICAL ROMANCE NOVEL OF THE YEAR.

This is the story of three women and one charismatic man. A glamorous historical romance, perfect for fans of Maeve Binchy.

It is 1950s New York, the time of dance halls, swing bands and the beginning of rock and roll. In The Emerald, Ava Brogan dances the night away, knowing that she will never be pretty like the other Irish girls there, wishing her mother wouldn’t keep plotting to find her a husband.

Here, too, Sheila Klein, Holocaust orphan, dreams of finding a star and making her name in the music industry. Tough and cynical, she has never let her heart be broken by any man.

Enter Patrick Murphy, with a sublime voice, a hit song in his back pocket and charisma to burn. Ava and Sheila‘s worlds are about to be turned upside down. They do not know that Patrick‘s first great love from Ireland is on her way to New York – determined to find and get her man at all costs. Beautiful Rose is used to getting what she wants in life and that’s not about to change any time soon.

I need to start this review by giving the cover some love; just look at how gorgeous it is! The picture does not do it justice at all! On the paperback version of this book, the lettering is embossed and the colouring makes the graphic pop; all that is quite difficult to see on a Jpeg version, granted. ‘It Was Only Ever You’ is my most favourite book cover of 2017, absolutely beautiful! It’s safe to say that as soon as I held the book in my hands and saw the cover, my excitement for the storyline grew immensely.

Kate Kerrigan is a new author for TWG, shamefully I had never heard of her before now so I never realised that she has quite a few books in her published backlog. On a positive note I now have a lot of new titles to binge read!

‘It Was Only Ever You’ is set in 1950’s New York & Ireland, when rock and roll was at its prime, and romance was fully appreciated. Patrick Murphy is our main character, with Sheila and Ava being two ladies on his radar. However, a certain ‘first love’ is about to get acquainted with Patrick’s new friends, much to the annoyance of everyone involved.

There is a lot to this storyline to get your teeth sunk into, which makes this review a little bit harder than usual as it means that a lot of the storyline is entwined and I don’t wish to accidentally give anything way.

All I will say is that the romance in this novel is beautifully described, enchanting and severely old-school. By ‘old school’ I mean old-fashioned; flowers, sweet words, gentlemanly behaviour and so on, instead of swiping right on Tinder and feeling like the most romantic person on the Earth. As a completely un-romantic sort of person, ‘It Was Only Ever You’ even managed to make ME feel nostalgic and ‘awwwww!!!!’ at the levels of heart-warming moments between certain characters. Readers; take note!

I love reading historical fiction/historical romance, and Kate Kerrigan’s novel was no different. I adored the fact that the storyline was set in the 1950’s as that is my favourite era (swing!). I thought Kate Kerrigan’s mesmerising writing gave the storyline such glittering depth, a depth that can only be achieved when, in my opinion, the author writes from the heart, truly believing in their characters and their lives.

People usually associate ‘Titanic’ (Kate Winslet etc) as being a truly romantic novel but, in my opinion, I believe that ‘It Was Only Ever You’ needs to get film rights or something, as it blew me away in such a way that ‘Titanic’ the movie never did.

Kate Kerrigan is such a wonderful story-teller, who can bring her characters to life at the blink of an eye. Enchanting, beautifully written, and perfect to lose yourself in; ‘It Was Only Ever You’ truly is a romantic, glistening gem of literary beauty.

3 thoughts on “#BlogTour! #Review – It Was Only Ever You by @KateKerrigan @HoZ_Books”