Dani’s on a mission to get her life back on track by the end of the summer. Running, rowing, aerobics and more, but perhaps all she needs are sweet treats and a second chance?

Ten years ago, Dani fled Appledore with a broken-heart and a suitcase full of shattered dreams. Only now is she brave enough to put her past behind her and return for a summer selling homemade ice cream and getting fit by doing sit-ups by the sea.

But the new-look cafe is filled with old memories of Jude, her teenage sweetheart-turned-sour. She thinks of him every time she swirls warm sauce onto a ‘chocolate-bockaglory’ and even with the help of Chris, her gorgeous personal trainer, the urge to break her diet is everywhere she turns.

When Jude makes an appearance at the cafe on the eve of Dani’s birthday party, history threatens to repeat itself. Is Dani strong enough to say no? And is the love she’s been longing for much closer than she thinks?

Sue Watson is back with book two in the ‘Ice-cream Cafe Series’! ‘Curves, Kisses and Chocolate Ice-cream’ may be book two in the series, but it can quite easily be read as a standalone, so don’t worry if you haven’t managed to read the first book beforehand. However, book one is a brilliant book so I do recommend reading that one anyway!

I say this every time I review a Sue Watson novel, but, this novel really was written from the heart. We follow the life of main character, Dani, who is still trying to mend a broken heart after all this time. Some people suggest getting under a guy to get over one, however, Dani decided that she was going to find a friend in all things sugar instead. Unfortunately for Dani, her relationship with sugar became strained, and her self-esteem plummeted, there was only one thing for her to do – lose weight. After several embarrassing attempts in the gym, Dani drove home with a plan….and a man of the personal trainer variety. Word on the street was that he was quite hot…

Dani is such a big-hearted, bubbly type of character who is incredibly easy to warm to. I reckon a lot of readers will be able to relate to her due to the weight issues, as well as the self-esteem issues. Even though those two issues are often emotionally draining, I found that I was able to like Dani a lot more because she came across as ‘real’. It was as though she took on the role of being ‘the voice of many’. Although, I am sure a lot of readers would be extremely envious at the prospect of having ice-cream at their fingertips.

Watching Dani grow, for me, was the highlight of the storyline. I was able to watch her come out of her shell, grow into her personality, and finally be able to learn the skin she was in. The personal trainer helped though, I must admit.

Out of the Ice-Cream Cafe series so far, ‘Curves, Kisses and Chocolate Ice-cream’ is my favourite. Whilst ‘Ella’s Ice-cream Summer’ was a fantastic novel to read, I found this second book a lot more heart-warming in terms of the relatability factor. It had the type of storyline that screamed ‘HUG ME’, with a hint of ‘please don’t pinch my ice-cream’. Not only that, the entire storyline was filled with such dry and fun humour, it’s pretty clear that the author has put her own personality in the storyline via her wit.

I have no idea (like always) how Sue Watson does it, but she continues to blow my mind with each and every storyline that she produces. Curves, Kisses and Chocolate Ice-cream is yet another outstanding, humorous, heart-warming and memorable read, from the cosy author we have all come to love and adore, Sue Watson.

I totally think Sue Watson should get an ice-cream named after her in the next book…just saying..

Big thanks to Bookouture for inviting me to take part in Sue Watson’s blog tour. The tour isn’t over yet, and if you wish to follow it, all of the bloggers involved are on the graphic below: 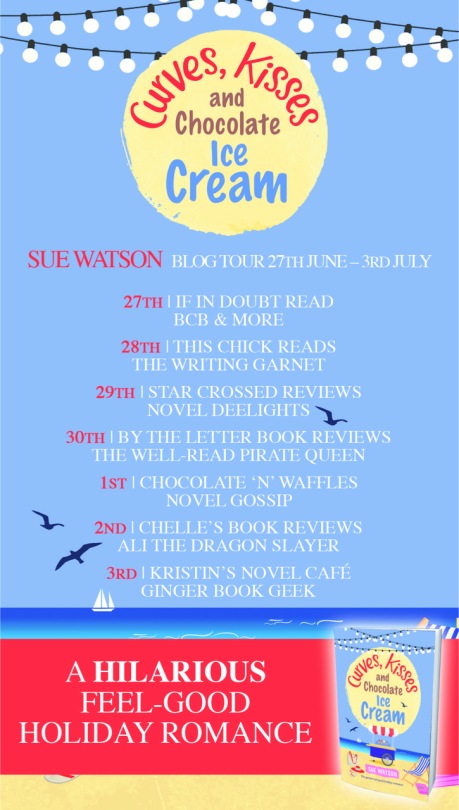 Bloody love this girl! Rescuing her from Spain, where dogs are often treated like a commodity with no laws to protect them, has got to be one of the best decisions I've ever made.