Escape to Tuscany this summer with Karen Aldous’s brilliantly uplifting read. Perfect for fans of Erica James and Cathy Kelly.

When Olivia Montague’s grandmother passes away, she decides it’s finally time to make some changes in her own life. So she breaks up with her ‘going nowhere’ boyfriend and embarks on a journey to her Nonna’s home in Tuscany.

Until now, Olivia has always believed that she’s incapable of love, after being abandoned by her parents as a baby. But with each day spent at the gorgeous villa nestled in the rolling Italian hills, she feels her heart begin to flutter…

And when handsome antiques dealer Hugh St. James arrives on the scene, she realises things might be about to change forever!

I really need to give Olivia Montague a big round of applause! GIRL POWER!! Nothing like a sassy, confident, independent woman to get a storyline going, right? I genuinely thought to myself ‘wowza, she could teach me a thing or two!’. I admired the characters flair 100%, as it was great to see a character taking charge of their own life.

The way that Olivia was portrayed at the start was youthful, she was described as such a bubbly sort of person with such a young sounding ideology. I honestly thought she was in her late twenties/early thirties! Some of her choices were a bit questionable, I’ll admit. So, when I found out that Olivia was a lot older than she came across as; my whole opinion of her changed. Olivia’s personality didn’t seem consistent to the age that she was given. Don’t get me wrong, I know that age is irrelevant as it’s only a number, but for me, Olivia was being portrayed as one character, yet acting like someone different. I hoped that in the latter part of the storyline, Olivia would have grown into her personality and become a teeny bit more consistent.

Did she? YES! I thoroughly enjoyed the second half of the novel as the storyline had warmed up, inconsistencies seemed to have disappeared, and things start becoming beautiful. Don’t get me wrong, me and Olivia weren’t bosom buddies and I couldn’t quite warm to her, yet her antics made me laugh.

I have never been to Tuscany, yet after reading Karen Aldous’ descriptions, I felt as though I was right there, soaking up the sunshine and gazing at the spectacular views. If I’m honest, the authors portrayal of Tuscany and the surrounding areas, were my favourite parts of the book. It was as though I had been put under a spell, such a surreal feeling.

As for Olivia’s love life, it seems to be the main focus of the story (apart from Tuscany itself, naturally). She dumped one boyfriend because there was no spark, but then she meets an OTT Italian, Alberto, who wants to give her anything and everything…right there and then. If a guy came onto me like that in a plane, two seconds after meeting him, I would have gone ‘uhhhhh BUHBYE’, yet Olivia was completely infatuated! Her reaction to Alberto, was quite surprising I’m not going to lie, but I couldn’t help but giggle. I would have loved to get inside her head and find out what on Earth goes through it! As the story progresses, Olivia meets guy number three. I really liked Hugh! He came across as such a gentleman, I just wanted to give him a big cuddle and a slice of battenburg cake, whilst letting him talk to me about his family history! Sooooo cute!

Despite my opinion of Olivia, her antics kept me thoroughly entertained, and somewhat agog, throughout the entire novel. I cannot fault the author on her enchanting writing style, and beautiful descriptions. I could tell that those moments were written from the heart.

Under a Tuscan Sky is ideal for a summer holiday read as it isn’t too heavy, too complex, nor does it require much sussing out. Instead it’s a lighthearted, romantic novel, which is set in such a mesmerising and beautiful country.

About Karen Aldous:
Karen Aldous enjoys village life on the edge of the north-downs in Kent with easy access to the buzz of London. Not only does she love the passive pleasures of reading and writing, she also craves the more active pursuits with her family and friends such as walking, cycling and skiing especially when they involve food and wine!

Karen gets much of her inspiration from her travels and if she had to choose, France, Greece, Switzerland, Italy and the USA would be her favourites. However, wherever she goes, she discovers a new character emerges in ‘Karen’s World’. She likes to write about strong independent women who can direct their own lives – but struggle to control them! And, of course there’s always a gorgeous hunk or two!

1st prize: £10 Amazon voucher, eCopy of Under a Tuscan Sky & a signed notebook

2nd & 3rd prize: eCopy of Under a Tuscan Sky & a signed notebook 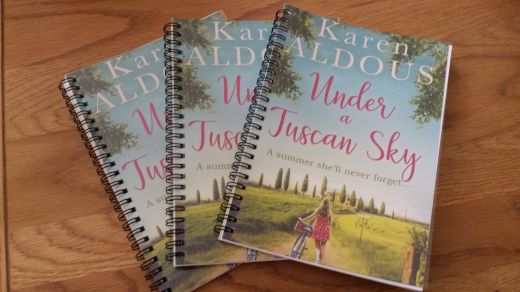