Everyone loves a good wedding, especially during the summer so why not give this book the spotlight more than once! If you wish to follow the rest of the tour, all of the bloggers details are on the graphic above. 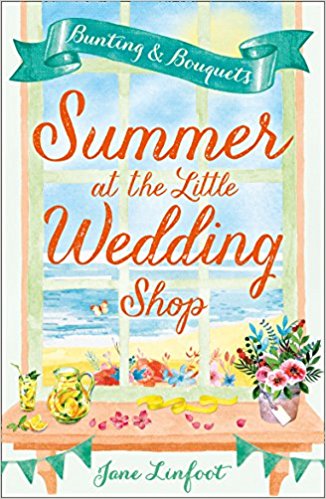 The third book in the bestselling series, ‘The Little Wedding Shop by the Sea’.

When the owner of Brides by the Sea, Cornwall’s cutest little wedding shop, offers Lily a job as their new wedding stylist, her first thought is – can she possibly pull it off?

Before she’s even sourced a fairy light or tasted a cupcake, Kip Penryn hires her services – but he’s opened an exclusive wedding venue in direct competition to her friend Poppy!

Lily feels like a traitor working for Kip, only everyone knows Penryn men are gorgeous but unreliable. All she has to do is sit back and watch him mess it up…doesn’t she?

Love is in the Cornish sea breeze this summer as the girls tackle their busiest wedding season yet. There’s plenty of bunting, bubbly and baking – but who is going to catch the bouquet?

Just to clarify, Summer at the Little Wedding Shop IS the third book in the series, however, the books can be read as a standalone and it isn’t a necessity to have read the previous books before you start this one. That said, you might find it easier to connect with the characters if you have already read the other books. Jane Linfoot does give reminders of the characters lives as the story unfolds, but it really would stop those ‘huh?!’ moments when various characters popped up (again).

Lily is stuck in a rut and has a huge, grey rain cloud camping above her head, just waiting to rain on her parade; especially seeing as Lily’s mother seems to enjoy leaving a bitter taste in her mouth by trying to be the Cornish version of, Cilla Black! To bide her time, Lily has been given the role of ‘wedding stylist’ in the wedding shop itself, a role where no Lily has gone before. Literally. All she would need is one larger than life (personality) bride who knows what she wants, to ease her into the role gently….right? Ha…ha…..

Once again, Jess manages to make me laugh out loud whilst covering my face with my hands. She is such an amazing character to read about, even if her ideas are extremely farfetched! Got to give her her due though, she manages to pull them all off, including giving Lily the new role!

I could just imagine the look on Lily’s face when she went to meet with the rivals in the storyline, seeing as there is a lot of history with the rival and his family. I’m sorry to say, but, I could not stand the bloke at first. His arrogance, pigheadedness and ability to not see further than his nose, REALLY got my back up! If it wasn’t for Lily’s vocal castration, I don’t think I would have put up with his character for much longer. Luckily though, Lily had her one liners down to a fine art which made me giggle. You know the sort I’m on about, ‘right place right time’ one liners. Genius.

I realised with the previous book that it wasn’t a good idea to read it on an empty stomach. Did I take my advice for this book? No, I did not. Poppy’s mouth-watering treats feature rather heavily throughout the entire book! The way Jane Linfoot had written about those sweet treats made it seem like the pages had turned into cakes…mmmmm. Seriously though, the descriptions of Poppy’s baking was beautifully executed, even down to the tastes. It’s safe to say that my stomach was rumbling and dribble may have, erm, landed on my kindle once or twice. #sorrynotsorry.

The pace of the storyline was excellent, nothing was rushed, nor were there any empty moments; Summer at the Little Wedding Shop kept me entertained from start to finish. There always seemed to be something to giggle at, a character to dream about, items to lust over, characters to get annoyed at (for me, the rival and one other person!), as well as multiple situations to think about. What more could you honestly want? Well, except real cake of course…

I was worried that certain characters and their personalities would end up taking centre stage, turning the novel into a serious, complex situation as opposed to the lighthearted and heart warming book we all know and love. Due to my concern above, I loved the storyline contained a couple of hidden messages yet it didn’t let those messages over power the rest of the storyline.

‘Summer at the Little Wedding Shop’ really is a beautiful, heartfelt and cosy read, which really needs to have its own space on your bookshelf (as well as the other two). Jane Linfoot’s beautiful writing is the star of the show; the entire novel was such a breath of fresh air and a lot of fun.