Eeeeee! I am one of the bloggers hosting today as part of Richard Parker’s blog tour for his new book, Be My Killer! I hope you enjoy my review! Big thanks to Kim from Bookouture for inviting me to be part of such a thrilling blog tour! 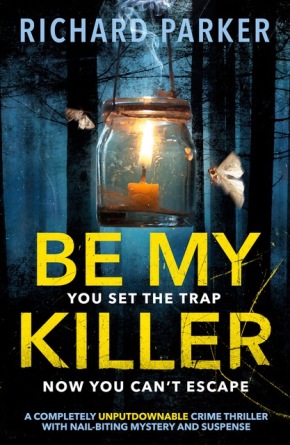 You set the trap. Now you can’t escape.When an online prank goes viral and triggers a spate of gruesome murders, documentary maker Hazel Salter watches in horror. But then Hazel’s childhood friend, Meredith Hickman, is the next victim and Hazel knows she has to find out what happened to her.Is it one killer or more? Random acts of violence, or part of a bigger, twisted plan?The police have no leads, but Hazel has a theory – one she’ll stop at nothing to prove – and she also has a film crew. She’ll make a documentary, catch the killer, and give Meredith justice.Her stage is the abandoned amusement park where Meredith was found. Her cast are the family and friends the killer left behind. And her crew? They keep disappearing, one by one…

Oh my GOD! How on EARTH am I meant to review this one?! Before I started reading ‘Be My Killer’, I had already been made aware (as I don’t read blurbs) that the plot was incredibly gruesome. Me being me thought to myself, ‘yeah, right then. several murders, gruesome enough’. -laughs manically- yeahhhhhhhh, even a bog standard murder (if there is such a thing) would be seen as tame compared to this book.

I had always shied away from gruesome novels in the past –  due to the fact that I was a wuss. The slight sniff of a murder in a book, and I’d be sitting in the corner wondering if I was going to be the next one murdered. Dramatic much? Within the last year or so I have pulled up my big girl pants, picked up a book with a cover that made me go ‘ooooo’, and got stuck into the storyline regardless of whether there was one murder, a psycho, or a psychotic serial killer involved. So, when I had the opportunity to read Richard Parker’s new novel, Be My Killer, I grabbed it with both hands and got stuck in when it reached the top of my TBR pile.

Basically, Hazel Salter is either going to go hard, or go home as her documentaries have hit a brick wall, and money is starting to become an even bigger issue than before. Just when she thought the decision had been made for her, a news headline caught her eye; someone she knew from her childhood had been murdered. Who killed her? Why did they kill her? Who will be next?

It felt as though from the minute I started reading the novel, other murders came to light alongside questionable characters. There was no warning, no tannoy announcement, not even a killer inspired Baywatch theme tune to announce the intensity, and the shock factor of the situation. I got told it was gruesome….there’s gruesome and then there’s unbelievably bonkers gruesome. ‘Be My Killer’ is the latter. Whenever a murder happened or something freaky came to light, the situation was always described in extreme detail, adding a little bit more detail incase you didn’t quite conjure up an image in your head the first time. Yet, every time I came across those moments in the book, I read them with my teeth sinking further into my lip, nausea waiting in the sidelines just in case, my brow furrowed as in ‘what the….’, then all of a sudden thinking to myself ‘oh that is just eurgh….I MUST READ MORE. I MUST’.

Yes the plot was unbelievably gruesome, BUT, it was unbelievably amazing! The attention to detail throughout the entire novel was outstanding! Each shocking situation was written in such a way that, instead of having a rough idea of how people were murdered, the author took the time to describe every single thing about the way that they were killed, little details about the character at the time of the murder; the image that I was able to recreate in my mind wasn’t a typical 2D one. No. It felt like a three-dimensional, extremely vivid image that gave me the opportunity to see everything. To feel the chilling atmosphere. To feel (and see) the fear behind the characters eyes. Whilst I am in awe of Parker’s ability to write such mind-blowing situations in great detail, I am also a smidge scared as to how he knows how to do those things!! Sheeeesh!

I was hooked on this book right from the very beginning. Everything about this book screamed ‘utterly bonkers’, as well as ‘oh my fudging god I need more’. For me there was no in-between moment, the entire storyline was highly charged, severely intense and full of copious amounts of shocking and spine tingling moments.

I F-LOVED this book. An outstanding, toe curling, nausea inducing, gripping storyline which kept me guessing the whole way through. I have found a new favourite author in Richard Parker. He has definitely set the bar high for his next novel, that’s for sure!!!!

Parker is an ex TV script writer, script editor and producer who now writes dark, stand alone thrillers. His first novel, Stop Me, was nominated for a Dagger Award.  The movie rights to his second, Scare Me, have been bought by Hollywood studio Relativity Media with screenplay completed by Wentworth ‘PRISON BREAK’ Miller and his third, Stalk Me, rode high in the US and UK Amazon charts.

11 thoughts on “#BlogTour! #Review – Be My Killer by Richard Parker (@BookWalter) @Bookouture”