What happens when you are forced to live and work with your worst enemy?

Twenty-four-year-old Ashley Morgan thinks her future is guaranteed when she takes over the reins of her family business. What could go wrong?

But when her father decides to give the job to Jamie Standley, his right-hand man, Ashley feels cheated and breaks off all ties with her father.

Three years later at the reading of her late father’s Will, she discovers to her horror that Jamie will continue to be director of Morgan & Hall, while she will only receive a small share in the business. But on one condition: that Ashley and Jamie work together and live under the same roof for a whole year…

Once again Ashley feels betrayed and cheated. To her, Jamie is an impostor and she is determined to make him pay. But forced cohabitation can sometimes have unpredictable consequences…

Ashley seems totally convinced that her father will ask her to take over his business. By ‘totally convinced’ I mean extremely cocky. Up until the very last moment, she believes that that job will be hers. Soooooo, I’m sure you can guess her surprise when her father DOESN’T give her the job.

Now, instead of having her moment of frustration and annoyance and just getting on with it, Ashley decides to cut all ties with her father. Then one day, Ashley comes face to face with the man who got the job and learns that both of them will have to live under the same roof as each other, for one whole year – all in the name of ‘inheritance money’.

Whilst this novel only took me a couple of hours to read, there were multiple moments where I just wanted to put the book down due to Ashley’s whining and constant tantrums. An adult having tantrums is really not a pretty sight. I could see WHY Ashley was frustrated at the start, don’t get me wrong, BUT, I couldn’t understand why she just had to throw her teddy out the pram ALL THE TIME!!! She seemed to find a problem with everything and anything; pardon my bluntness but I couldn’t stand her.

Jamie on the other hand (the man who got the job over her), seemed to have more likeable traits than Ashley, and he came across as quite a fun character. His humour was brilliant, and the amount of patience he has is absolutely incredible. For me, Jamie was the one that gave the storyline the sustenance, the likability factor, as well as managing to keep the storyline above water.

The love hate relationship between Ashley and Jamie was somewhat predictable, yet at times it was quite entertaining to read. During those moments was when I saw little snippets of Ashley’s personality that I actually liked; she was being nice, I just wish she showed more of that side of her personality.

Did I love this book? No, I didn’t. I liked the overall concept of the storyline and I really do think that it has a lot of promise.

Did I hate this book? Oddly enough, no, I didn’t. I was entertained, it was pleasant enough to read. For me, Ashley’s character is what let the book down. She really isn’t likeable, she seemed to annoy me more than anything else and I just couldn’t get over how ugly her tantrums were.

All in all ‘The Inheritance’ was pleasant, entertaining to a point, with an incredibly promising concept to the storyline. 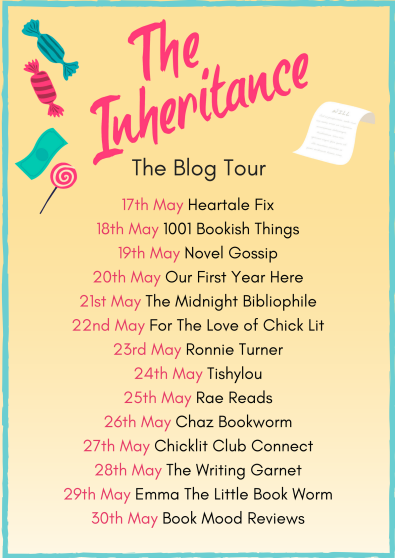 2 thoughts on “#BlogTour! #Review – The Inheritance by Angie Coleman @Aria_Fiction”