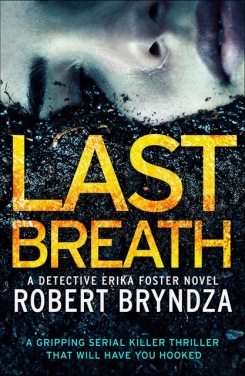 He’s your perfect date. You’re his next victim.

When the tortured body of a young woman is found in a dumpster, her eyes swollen shut and her clothes soaked with blood, Detective Erika Foster is one of the first at the crime scene. The trouble is, this time, it’s not her case.

While she fights to secure her place on the investigation team, Erika can’t help but get involved and quickly finds a link to the unsolved murder of a woman four months earlier. Dumped in a similar location, both women have identical wounds – a fatal incision to their femoral artery.

Stalking his victims online, the killer is preying on young pretty women using a fake identity. How will Erika catch a murderer who doesn’t seem to exist?

Then another girl is abducted while waiting for a date. Erika and her team must get to her before she becomes another dead victim, and, come face to face with a terrifyingly sadistic individual.

Gripping, tense and impossible to put down, Last Breath will have you on the edge of your seat, racing to the final dramatic page.

Eeeee!! So excited to be one of todays stops on Robert Bryndza’s blog tour for his brand new book, Last Breath, which was published by Bookouture on the 12th April! Big thanks to Kim Nash for inviting me onto the tour! Hope you enjoy reading my review.

I left reading ‘Last Breath’ until the last-minute as after reading the prologue a few weeks back, I found myself being a humongous wuss. As I’m sure you’re aware by now, thriller/killer novels haven’t always been at the top of my radar so when I do actually read one, i’m hopping, skipping AND jumping over my comfort zone line. I really had no idea what to expect with the latest Erika Foster novel, hell, I haven’t even read the previous ones! It was that apprehension which made me wait after all,  I needed to read the book anyway for my blog tour stop! After giving myself a kick up the youknowwhat –  I sat down to read the ‘Last Breath’ on the 10th April, the 10th April saw me finish the novel as well.

Yes, it took me a matter of hours to read.

As soon as I re-read the prologue I was absolutely hooked. I even had to pause and think to myself, ‘wait brain, you usually twat about right about now!?’. But I didn’t twat about, in fact, I just kept reading and cursed under my breath when my bladder required emptying, or my little person required food for the 17575738596th time that day. I JUST WANTED TO READ GODDAMMIT!

I can’t even summarise the storyline because I know I would end up typing something I shouldn’t. Every single piece of information needs in this book needs to be experienced through your very own eyes. It’s all well and good someone saying ‘oh my god it was so intense!’, if you haven’t experienced it for yourself. Plus, there aren’t enough adjectives to describe JUST how brilliant this storyline is. Being told that it is ‘an intense read’ does not do the book justice at all.

My heart felt as though it was going to pound out of my chest at around the halfway point, I was unable to think rationally, and my hand was getting so tired from being raised to my mouth, that it just rested against my cheek ready for the next ‘mouth open’ moment. The descriptions weren’t gorey in a horrible, scary kind of way; they were gorey in a way that shocked me yet taught me something. That sounds daft but I really had no idea about certain circumstances until now.

I kept fidgeting on the sofa whilst I was reading, as I had a horrible feeling that Erika Foster and her team were going to be too late. But as soon as that thought crossed my mind, something else happened. At that moment in time I felt like I was watching the drama unfold with my very own eyes as though I was able to see the scenery for myself, being able to smell an accumulation of aftershave and perfume mixed with car fumes. It was so surreal. The more vivid the imagery became in my mind, the more on edge I became and a mixture of anger, disgust and apprehension took over.

Have I said that I was hooked by the storyline? Haha.

After reading ‘Last Breath’ I cannot believe that I have never read an Erika Foster novel before. She is such a kick ass, mouthy and on point detective; I loved her!! Pardon the pun but ‘Last Breath’ too MY breath away. Never mind the X-Factor, Robert Bryndza has the SHOCK factor and my goodness he is PHENOMENAL at creating such nail-biting, intense and flawless storylines.

‘Last Breath’ is most definitely a book NOT to be missed. This book is full of complexity, suspense and kick ass characters, and to top it off, it also has a storyline which starts off brilliant yet it gets even better with every turn of the page. I never knew that was possible.

A unbelievably gritty, spell binding, intense read that is FULL to the brim of ‘hand in mouth’ moments. Absolutely incredible. I feel like I’ve missed out by not reading Robert’s previous novels in the series, but thanks to his AHHHHHHHMAZING novel, I will be binging on the rest of Erika Foster for Easter, no joke.

I think some of the books on my ‘top books ever’ list will be getting shunted down a peg or two! Move aside as Mr.Bryndza has now got a place on TWG’s most favourite books EVER.

Huge thanks to Bookouture!

Robert Bryndza grew up on the east coast of England, but now lives in Slovakia with his Slovak husband. His debut romantic comedy The Not So Secret Emails of Coco Pinchard became an Amazon bestseller. He’s published further Coco Pinchard adventures and two more best selling stand-alone romantic comedies, but has always harboured a desire to write crime, and was a finalist in the BBC Writersroom Drama Academy.

Bookouture publish Robert’s crime fiction series featuring Detective Erika Foster and the first book in the series The Girl in the Ice has sold over 1 million copies.

The blog tour for ‘Last Breath’ is nowhere near over! If you wish to check out the other stops on the tour, check out the details on the picture below!