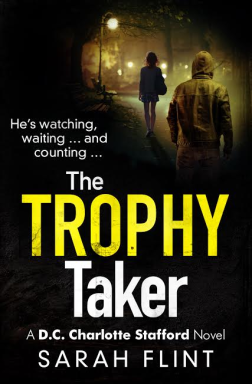 He’s watching, waiting… and counting. The next gripping serial killer read in the DC ‘Charlie’ Stafford series, from the bestselling author of Mummy’s Favourite. Perfect for fans of Angela Marsons.

He keeps each one floating in formaldehyde to stop them from rotting. Each finger denotes a victim, tortured and butchered, their heart ripped out and discarded, replaced instead by symbols of their treachery. He sits alone admiring his trophies weekly; each and everyone of them guilty in his eyes. And now more must pay.

But who or what links the victims?

DC ‘Charlie’ Stafford is already investigating a series of escalating racist attacks and it now seems she has a vicious serial killer on her patch. With no leads and time running out, the team at Lambeth are at near breaking point.

Something has to give… and all the while he’s watching, waiting… and counting.

New author to add to my collection as well as a new female DC protagonist, not bad going really is it?! ‘The Trophy Taker’ is the second book in the DC Stafford series and it can be read as a standalone. The first book in the series, ‘Mummy’s Favourite’ doesn’t NEED to be read before you begin this book, but if you want to read it first then by all means knock yourself out (not literally please!).

Whilst I don’t have much experience in crime thrillers, the investigations described in this novel were extremely eventful and very high energy, which gave the storyline momentum. The storyline didn’t seem to be lacking in horrific circumstances at all which is obviously what needed to happen at that moment, however, I found that several parts of the storyline went over my line of comfort. It’s nothing against the author by the way, as she has fulfilled her mission in being able to get a reaction out of me with her words alone. And yes, even though I found parts of the book to be rather uncomfortable, the entire storyline was really well written.

There were also many moments where I struggled to differentiate between reality and fiction, as Sarah Flint gorey and realistic descriptions managed to make her book come to life, as well as being able to stand out from the crowd.

It’s clear that Sarah Flint knows her stuff due to her own policing background, which luckily for us, she has been able to bring her knowledge back to life in such a memorable and dynamic way.

Police procedural/crime thriller novels and I, will never be the best of friends as I am too much of a wuss. However, whether this genre is my favourite or not, the true star of the novel is Sarah Flint herself and her intriguing, gritty and genius style of writing.

Sarah Flint is an exceptional author who certainly knows how to captivate her readers with her intense storylines and edgy characters; this book really did keep me on my toes.

About the author
With a Metropolitan Police career spanning 35 years Sarah has spent her adulthood
surrounded by victims, criminals and police officers. She continues to work and lives
in London with her partner and has three older daughters.
Links to buy

There are other stops on the blog tour to keep your thriller radars at bay, make sure you take a peek at the stops! All the details are below:

7 thoughts on “#BlogTour! #Review of The Trophy Taker by Sarah Flint (@SarahFlint19) @Aria_Fiction”