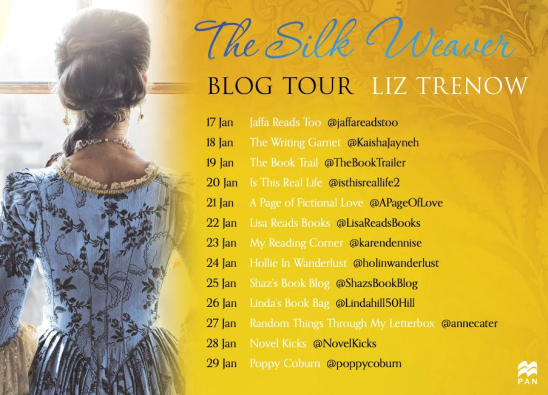 I really think we should all take a moment to appreciate how beautiful the tour banner and book cover are!

I am absolutely thrilled to be today’s stop on Liz Trenow’s blog tour for her upcoming novel, The Silk Weaver, which will be published on the 26th January by Panmacmillan. If you haven’t come across the book as of yet, here is the blurb: 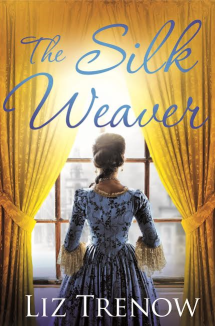 1760, Spitalfields. Anna Butterfield’s life is about to change forever, as she moves from her idyllic Suffolk home to be introduced into London society. A chance encounter with a French silk weaver, Henri, draws her in to the volatile world of the city’s burgeoning silk trade. Henri is working on his ‘master piece’, to become a master weaver and freeman; Anna longs to become an artist while struggling against pressure from her uncle’s family to marry a wealthy young lawyer.

As their lives become ever more intertwined, Henri realises that Anna’s designs could give them both an opportunity for freedom. But his world becomes more dangerous by the day, as riots threaten to tear them apart forever . . .

Inspired by real historical events and characters, The Silk Weaver is a captivating, unforgettable story of illicit romance in a time of enlightenment and social upheaval

The Silk Weaver by Liz Trenow can be pre-ordered now from Amazon , ready for publication on the 26th January (e-book & paperback).

Today, my tour stop consists of a guest post which lets us into Liz’s inspiration behind her novel, The Silk Weaver. Thank you Liz!
I was researching the history of my family’s silk weaving business, which started in

Spitalfields, East London, in the early 1700s (and is still weaving today in Sudbury, Suffolk)
and discovered that the first address was in Wilkes Street. Just a few yards away is the
house where the eminent silk designer Anna Maria Garthwaite lived at around the same
time. It was so exciting to imagine that she would have known and worked with my
ancestors.
Anna Maria was one of the most celebrated textile designers of the eighteenth century, her
silks were worn by royalty and nearly a thousand of her designs are in the Victoria &amp; Albert
Museum in London. Yet no-one knows how she learned her craft or how an unmarried
middle-aged woman managed to develop such a successful business in a male dominated
industry.
It is this mystery that sparked the idea for the novel. About the author. 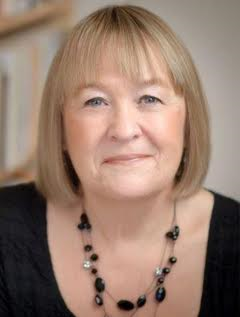 Liz Trenow is the author of three previous historical novels: The Last Telegram, The Forgotten Seamstress and The Poppy Factory. Liz’s family have been silk weavers for nearly three hundred years, and she grew up in the house next to the mill in Suffolk, England, which still operates today, weaving for top-end fashion houses and royal commissions.

This unique history inspired her first two novels, and this, her fourth novel.

Liz is a former journalist who spent fifteen years on regional and national newspapers, and on BBC radio and television news, before turning her hand to fiction. She lives in East Anglia, UK, with her artist husband, and they have two grown-up daughter.

5 thoughts on “#Tour! #Guestpost from @LizTrenow, author of ‘The Silk Weaver’. @panmacmillan”