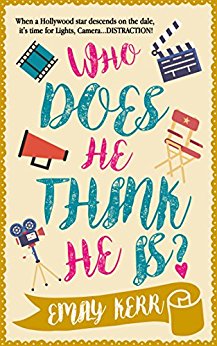 Lady Aurelia Osbourne-Lloyd has long wished her bank balance was as big as her name. But her home, Leydale Park, is more of a pile in a state than stately pile, and with her father off ‘finding himself’ in Thailand, it’s up to her to turn the family fortunes around by entertaining demanding tourists.

When – thanks to her father’s interference – a Hollywood production company chooses the estate as a location for a Regency movie, a whole new level of chaos enters Aurelia’s life. Her quiet days shattered and privacy non-existent, she has no choice but to go with the flow and let them take over.

Never mind the added distraction of dishy leading man, Xander Lord, who may have an ulterior motive for wanting to get close to her…

Can Aurelia keep her cool in light of all the upheaval?

I would like to start by saying a HUGE congratulations to Emily Kerr, as today is the publication day for her debut novel, ‘Why does he think he is?’! How exciting!
I noticed the cover of the book straight away as it began to do its rounds on Twitter a few weeks ago. OF COURSE I made a lot of noise about it. Who wouldn’t? I must have shouted really loudly as Emily contacted me asking if I would review her book! After I did a little dance around the living room in my Minnie Mouse pjs (don’t laugh), I got settled with her book.

Due to the little clues on the cover, there is a little bit of ‘lights, camera, ACTION’ going on in the storyline which gave me a few giggles along the way. What I didn’t expect though, was for the storyline to go from a Hollywood buzz to a stately home needing funds. I’m not complaining in the slightest as it was impressive seeing the storyline change so effortlessly. One moment we were being taken on a tour and surrounded by historical features, and the next we were seeing how the other half live on a film set! Honestly, you won’t be bored reading this book as there is so much going on. It’s the right amount of hustle and bustle for a book, if that makes sense?

Not only that, by golly is there a few colourful characters in this novel! I am not going to say who as that will spoil the surprise! Lets just say that they’re FABULOUS and hilarious and have a few things up their sleeves. The only thing that irked me was that I felt like a couple of the characters were lacking purpose. Don’t get me wrong, they seemed nice enough, but they just didn’t seem to be beneficial to the story. Again, I won’t say who they are as it is my personal opinion about the book and not a negative point towards the author.

‘Who Does He Think He Is?’ is a laugh out loud, warming tale that highlights the importance of the word ‘believe’. Emily has written such a timid main character who, thanks to path she has to walk down, learns to believe in what has been under her nose the whole time. It’s hard to believe that this is a debut novel so hats off to Emily Kerr and her book full of giggles.

Who Does He Think He Is? is out NOW to buy from Amazon UK

One thought on “#Review of Who Does He Think He Is? by @EmilyKerrWrites @crookedcatbooks #publicationday”