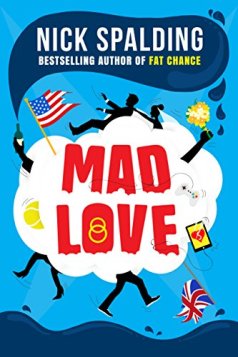 Can two people who have never met make a marriage work? Popular dating site Sociality thinks so, and is marrying London lad Adam to California girl Jessica to prove it.

What better way to show that your ‘love algorithms’ work than to put two complete strangers together in an expensive publicity stunt? But, as livewire Jess and lazybones Adam quickly discover, just because a computer says you’re the perfect match, it doesn’t make it so!

Two million Sociality subscribers and the media are following the happy couple’s progress, and they have to make a go of it or they’ll lose everything, look like idiots, and destroy Sociality’s reputation. But can the mismatched pair, who seem to be constantly at each other’s throats, put their differences aside and work their way into each other’s hearts?

Nick Spalding, bestselling author of Fat Chance and Bricking It, will make you cry with laughter at this story of marital warfare—complete with sinking boats, badly aimed flatulence, well aimed tennis balls and some very suggestive pastry.

You see a familiar name crop up on the book scene, act like Buddy from Elf with ‘I KNOW HIM/HER I KNOW HIM/HER’, then realise you only recognise the name but haven’t read any of their books before..
Sound familiar? ‘Mad Love’ was one of those moments. How I haven’t ever read any of Nick’s books is beyond me. For that, I apologise, don’t tell me off -sniff-.

I truly think that the title sums this book up completely. Well, the ‘mad’ part anyway! Seeing as I knew OF Nick’s work, I knew that he wrote rather funny books, so I was waiting for the giggles from the beginning. Unfortunately, it did take me a couple of chapters until I laughed, BUT, once I started laughing like a seal, I couldn’t stop. The predicaments that Adam and Jessica, got themselves into was a mixture of cringeworthy, hilarious and ‘omg you didn’t!?!’, moments. Put it this way, all the ’embarrassing’ things that people hide or deny in relationships; Jessica and Adam showed them in all their glory.

Despite the way that the couple found each other, they did make a pretty good go of it and their arguments were absolutely HILARIOUS to read. I mean, I will never look at a tennis match in the same way…or the Eiffel Tower.

Seeing as my laughter button seemed to a bit hit and miss for the first two chapters of the book, I did sit on the fence about the storyline as it was sheer bonkers. I didn’t know what to expect at all, but I was a little bit concerned that I would be able to keep up with the bonkers lifestyle which Jessica and Adam, live. (I did btw!)

Nick Spalding has such a laid back way with words;  it really is genius the way he can write embarrassing situations as if they’re the ‘in thing’, in such a fabulous way. Even though the storyline is sheer bonkers, and the insults are more laughable than hurtful, ‘Mad Love’ gave me a much welcome distraction with its breath of fresh air vibe.
If you need a light hearted, guaranteed to belly laugh read, you would be MAD not to read Nick Spalding’s latest read.