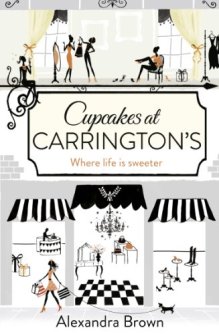 Perfect for fans of Meet Me in the Cupcake Cafe and Breakfast at Darcy’s.

Georgie Hart loves her job – running the luxury handbag concession at Carrington’s Department store in the pretty seaside town of Mulberry Bay, and treating herself (once too often!) to a red velvet cupcake with buttercream icing in Carrington’s café.

But Georgie is thrown into disarray when Carrington’s is plunged into a recession-busting makeover, cueing the arrival of femme fatale Maxine, who wields the axe in her immaculately-manicured hands.

It spells a recipe for disaster for Georgie and soon she is fighting not only for her job, but also for the attentions of her gorgeous boss, James. And when hot newcomer Tom arrives, who may or may not be the best thing since sliced bread, Georgie must decide where her loyalties really lie…

Anyone who knows me really well; will know that monochrome will catch my eye quicker than Cookie Monster will catch a cookie (and that is saying something!). As I was trawling through Amazon, trying to find myself a little cheer up treat, this beautiful book caught my eye. Not only did the monochrome look shout ‘elegance’, it also made me rather intrigued, especially with a title like ‘Cupcakes at Carringtons‘ and a sleek cover with no sign of a cupcake. It tickled my taste buds…

Oh my! Have you ever watched the TV show ‘Mr Selfridge’? As Alex Brown set the scene of the department store with the luxurious items, tip-top decor and workers badges that you could see your face in, it made me feel as though I was walking into the store in that TV show. I was incredibly impressed that Alex’s detailed writing made me visualise the store as though I was standing in it; and that was all within the first few chapters. Now that is talent!

Georgie Hart is the main character within the story, as readers, we follow her life and get an insight of the other characters personalities from a different angle. She loves her job (and the cupcakes in the cafe), but before long, she realises that she would rather be anywhere else than be at her workplace. I did enjoy trying to work out the characters who I thought were hiding things, things are definitely not as they seem to be in Carringtons!

As I am not one for reading blurbs (usually), my initial thoughts of the book were that I was entering a world of sweet treats, cupcakes and more cupcakes. You know, a book with cupcakes at its main focus. But, as I browsed Carringtons, it soon became clear that the cupcakes would be a tantalising addition to an already gourmet read.

The whole feel of the storyline was elegantly executed and written with such grace; I adored feeling as though I was being pampered. Pampered by an authors extraordinary writing mind. Pampered by the intense truth as the drama unfolded further on in the story. Pampered by a truly wonderful, exciting and charismatic read. I WILL be going to Carrington’s again with the next book in the series, but this time, I will ensure I wear a fascinator so that I can ooze elegance exactly like the author and her words.

Cupcakes at Carringtons by Alex Brown, published by HarperCollins, is available to buy now from Amazon UK.

One thought on “Review: ‘Cupcakes at Carrington’s’ by Alexandra Brown (@alexbrownbooks) @HQstories.”

Joined the #booktrolley gang, and finally decided to sort out some of my proof copies. This is by no means all of my proofs, just a small selection.