Ex-detective turned author David Videcette, author of ‘The Thesus Paradox’, is popping his TWG cherry today! -claps-. What better way to spend your first time on TWG blog than sharing a love letter. Oh yes ladies, David finally gave in to my request and returned to his teenage years of writing love letters. Oh, wait…it wasn’t for ME (sniff, sniff, sniff), it was for….oh heck, I shall go sulk, letter includes sheep and stuff! I jest….ish!

TWG is thrilled to welcome Mr David Videcette and his guest post – An Ode to a Love Letter!

AN ODE TO A LOVE LETTER

The lovely Kaisha of The Writing Garnet has (jokingly) asked me to write her a love letter. So here goes…

*Googles how to write a love letter.*

Yes, here we go: ‘Fifteen tips on how to write a love letter’. That’ll do…

I’ve suddenly realised that I haven’t written a love letter in many years, not since I was in my teens. Thinking back, it was probably really badly written. The punctuation and spelling were probably awful, the words clumsy and the layout clunky.

Computers and the internet have made many these things much easier. We can steal ideas and copy good practice from people we’ve never met. I could probably throw a love letter together in less than five minutes from the internet now, instead of it taking the five hours or so that it took me in my teens.

But if I copied it, it wouldn’t be mine, would it? If you knew me, you’d see that the words I’ve used aren’t necessarily how I speak. You’d be disappointed. It wouldn’t be me standing in front of you, pouring my heart out, wanting you to see how I felt. I’d be some faceless, nameless instantly forgettable ‘other’. That’s no good.

That’s both the problem and beauty of the internet. While it gives us almost infinite wisdom of a type, and the opportunity to peek into places that we didn’t even know existed – it also allows people, with very little actual knowledge of a subject, to mimic those that have. It turns people into a herd of sheep, all flocking in the same place, thinking the same thoughts and using the same type of ideas. And I’ve never found sheep very romantic. I’d not want to take one to bed. Cuddly perhaps, but they are not the thing of romance. Who wants a sheep in their love letter?

*Crosses off sheep as a romantic icon and thing of desire.*

We want passion, excitement, lust – and desire that you can taste, dripping off the pages of a love letter. Those things are not the norm. I’m not going to find them in my internet browser or wandering around in the local Tesco. I need something raw, something real, something wild and untamed. I’m thinking lynx, Siberian tiger, or an all-conquering lion as an icon.

But if I’m to write about being a creature that can slay all others, I need to feel like the king of all beasts – or at least know what it looks like, up close, and personal, as it snarls in my face, it’s spittle settling onto my skin, as it decides whether I’m worthy of the effort required to kill me.

You want the emotions that raw, don’t you?

*Wonders if that sounds a bit too scary, and not very romantic?*

I didn’t start out being a writer. I spent twenty years in the police, much of it working in covert or specialist departments. I worked as a detective on some of the biggest and most exciting investigations of our times. Not all of it was easy, some of it was utterly terrifying, some of it was so upsetting it still makes me burst into tears, even to this day, years later. So you can be sure that I’ve seen and experienced every human emotion there is. It’s that experience and emotion you want in my writing isn’t it?

*But the criminal I chased down the train track had just robbed an old lady and beaten her up on her doorstep. And you don’t want me in the same frame of mind, when I catch you. That’s not the right sort of passion!*

No. You want to know about love.

I have loved before. A few times. But I’ve lost too. Both my parents died within a few months of each other a few years back, it knocked me for six. It made me realise how important family is, something that I’d taken very much for granted before that. Although I’d seen death every single week in my policing career, I’d never really felt it, not like I did in those few months after my parents passed away. I have two daughters who I spend as much time as I can with. But they grow up so fast. It seems like yesterday I was pushing them on swings in the park, now they are talking about music and films I’ve never even heard of.

*That’s the wrong sort of love, you idiot. Get back on track. This is a love letter!*

I think that the act of writing is the easy bit. Writing things that people enjoy reading, well that’s a tougher objective. Writing a love letter, or a bestseller is like having a relationship. If you neglect it and don’t spend enough time together, it will fail. Nothing will happen. Of course, simply spending time together isn’t enough either, you have to enjoy each other’s company and understand how to make the best of what’s at your disposal.

*She wants to know about commitment and the effort you’re going to put in!*

I cram my writing in, often around other book and media commitments. It can be very difficult. But, much like love and romance, if there is a will, there is a way. Even during the busiest of days, there’s always space to tell someone how special they are; to write a few more lines…

Because, just like a love letter – to hit the spot, your writing should draw on your many years of wisdom, be in your own words, and be from the heart. 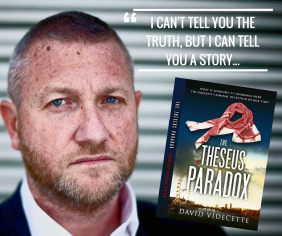 I don’t think anyone would complain if that sort of love letter came their way! I’m not going to lie, I chuckled as I read this post the first time, and again the second, yet I found the true emotion within the words. It’s wonderful when you’re able to see a different side to an author, or a person, especially when their straight laced face (see above), doesn’t away much. My first….I mean, TWG’s first love letter! Thank you David for writing such a fantastic post for TWG, hope you can stop by the blog again!

‘July 2005: in the midst of Operation Theseus, the largest police investigation that the UK has ever known, Detective Inspector Jake Flannagan begins to ask difficult questions that lead to the mysterious disappearance of his girlfriend and his sudden suspension from the Metropolitan Police.

Who masterminded London’s summer of terror?

Why can’t Flannagan make headway in the sprawling investigation?

Is Jake’s absent girlfriend really who she claims to be?

While hunting for the answers to the most complex case in British history, one man will uncover the greatest criminal deception of our time.’

David Videcette is a former Scotland Yard investigator and an expert in terrorism and organised crime. David’s bestselling novel, ‘The Theseus Paradox’ is a page-turning, twisty police thriller set against the investigation into London’s 7/7 bombings, a case which he worked on as a detective for five years. The truth behind the fiction was investigated by The Sunday Telegraph, ITV News and Sky News.

How much is real and how much is a story, only YOU can decide…

One thought on “Author guest post! ‘An ode to a love letter’ by @DavidVidecette; author of ‘The Thesus Paradox’.”