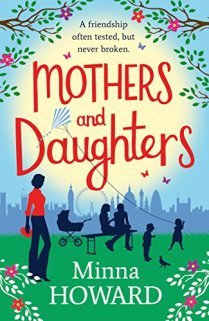 ‘Alice finds herself suddenly widowed in her early forties, leaving her with an empty house and a lonely heart.

Laura and Evie, her twenty-something daughters announce their separate and unexpected news, which ploughs Alice straight out of grieving and into the prospect planning a wedding and becoming a reluctant – yet glamorous – granny, to not one, but three grandchildren.

Frank, an old family friend returns to give his godchild Laura away at her wedding.

A whole host of secrets unfold that rock the family’s foundations and set Alice free to finally begin a new, exciting chapter of her life with no regrets.’

‘Until death do us part’ is part of the vow that’s said when you get married isn’t it? You find ‘the one’, get married and imagine your wedded bliss to last for many, many years (I can only assume as I have never been married). But what if you found yourself to be a widow at the age of forty? Don’t they say that life begins at forty? How can life begin at forty when one life has just ended? Alongside the grief and loneliness, add a dose of shocking news from daughter 2 AND unexpected news from daughter 1 and you get one stressed out Alice. Will Alice’s relationships with her daughters survive the newly added pressure? Mother and daughter bonds are strong, but are they THIS strong?

Minna Howard’s book has been sitting on my Kindle since May and I have only just gotten around to reading it, shocking isn’t it? Being a mother with a daughter myself, this book intrigued me immensely.

It didn’t take me that long to warm up to Alice as she has a heart of gold and wants to protect those that are close to her, regardless of the pickles they land themselves in. When it came to her children; Laura and Evie, I found myself leaning more towards Evie. Maybe it was because I could relate to part of her situation, or maybe it was because she seemed to be around more in the story.

I loved the way Minna has based her storyline around modern-day situations, some of which a lot of readers will probably be able to relate to. She has made those particular situations their own personality, and, instead of the usual negativity that seems to appear when those topics arise, Minna has written them with a ‘it’s happened…AND?’ attitude. For me, that was a breath of fresh air. She hasn’t written the circumstances through rose-tinted glasses, she has written them realistically from another point of view.

I may sound old before my time here, but the way that Laura spoke to her mother annoyed me haha. She spoke with such a condescending attitude but it was Alice’s response that surprised me the most. I thought Alice to be a feisty woman, but when it came to the interaction with her daughters, she let herself become a doormat. That made me quite sad. Gosh, I get involved in books don’t I haha.

If I’m honest, I didn’t have any idea what to expect when I read this book, I just went with the flow. Whilst ‘Mothers and Daughters’ is predominantly based around Alice and her two daughters, the book changes direction three-quarters in. Even though I wasn’t expecting anything in particular to happen as it were, I had my mouth open in shock. It’s crazy how you create a bubble for the ones that you love and see no wrong in them, but not everything is at it seems, is it?

Mothers and Daughters is a book about love, trust and new beginnings. Minna Howard has written such a diverse a homely story which oozes with personality and emotion. This book is an ideal read for any day, and every day. A book that will make you want to curl up on the sofa with your favourite chocolate whilst discovering the true depth of a mother/daughter bond. thought-provoking and deep. Roll on the next book!

Mothers and Daughters by Minna Howard, published by Aria, is available to buy now from Amazon UK.

One thought on “Book review – Mothers and Daughters by Minna Howard.”