Just to clarify, the title isn’t a lie, I would LOVE to meet Polly James. Luckily her book title fits in quite nicely!
‘Would like to meet’ is Polly James’ second novel which was released on the 30th June, published by Avon.
Sorry, before we go any further, can we take a moment to appreciate the cover of the book!!!! It’s gorgeous!! If you’re a book nerd like myself, you’ll know to appreciate a shamazing (sorry Avon 😉 ) cover when you see one! 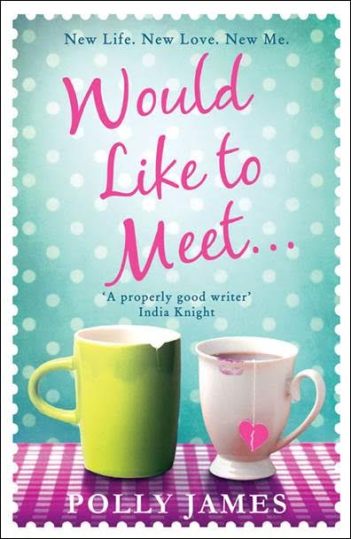 ‘A hilarious, heart-warming read perfect for fans of Shirley Valentine and You’ve Got Mail.
Could the worst thing that’s ever happened to Hannah Pinkman also turn out to be one of the best?

She and her husband Dan have reached the end of the line. Bored with the same gripes, the same old arguments – in fact, bored with everything – they split up after a trivial row turns into something much more serious.

Now Hannah has to make a new life for herself, but that’s not easy. She’s been so busy being a wife and mum that she’s let all her other interests slip away, along with her friends. And when Hannah is persuaded to join a dating site, her ‘best match’ is the very last person she expects it to be . . .

A clever, funny and poignant novel about life after a long relationship, the importance of friendship, and rediscovering your identity.’

Polly James and her publishers, Avon, have kindly given TWG an extract from the book to share with you today, enjoy!

‘My aim’s a bit off, but I do finally succeed in getting Dan’s attention. In fact, he almost jumps out of his skin.

“What the fuck, Hannah?” he says, fishing the sock out of his coffee, and making a face. “Why did you do that?”

“You were ignoring me,” I say. “Too busy ogling those girls with their boobs and arses hanging out.”

“Oh, for Christ’s sake,” says Dan, who suddenly looks quite angry. Very angry, actually. I’m not used to seeing him like that, even during the stupid arguments we’ve been having recently. He did get a bit cross when I complained about him and Joel never putting toilet-roll inners into the bathroom bin the other day, but nothing like as cross as this. Now he looks as if he can’t stand the sight of me.

Dan glares at me, and then he adds, “All I wanted was to chill out in front of the TV, after a bloody long day dealing with Pearl, and it didn’t matter what I was watching, as far as I was concerned. But if I had picked this programme on purpose, then who could blame me? The only flesh I get to see these days is on TV.”

Dan seems almost as shocked by what he’s just said as I am, and there’s silence for a moment, as we both let his words sink in. Then I swallow, and say very slowly and clearly, “You mean that’s the type of flesh you prefer. You make that pretty obvious.”

Did I really say that out loud? I laugh, to lessen the sting, but Dan has lost his temper now.

“You can’t say something like you just did, and then laugh as if you didn’t mean it, Hannah,” he says. “And how exactly do I make my ‘preference’ so obvious?”

I wish I’d never started this conversation now. It’s one thing to feel inadequate, but ten times more humiliating to admit to it, and then to explain why you do.

“I just meant,” I say, keeping my head down and staring intently at a piece of fluff on the carpet, “that you make it clear that you don’t fancy me any more. I know I don’t look like the woman you married these days, but –”

“You don’t act like her, either,” says Dan. “In fact, you’re nothing like her. You want me to be as miserable as you are, and God forbid that either of us should have any fun. So I don’t quite get what I’m supposed to fancy about someone who’s more interested in Joel and Pearl than in me, as well as in their stupid job, and who’s so obsessed with losing their looks that they walk around with a face like a wet weekend the whole damn time. That’s really bloody attractive.”

I’m so stunned I don’t know what to say, or where to start, so I just sit there, twisting my hands in my lap, and trying to ignore the tear that’s rolling down the side of my nose and heading towards my mouth. Dan spots it and it seems to annoy him even more.

“I don’t know why you’re crying, Hannah,” he says. “You started this, and normally you’d be the one with the killer line to finish it. So why don’t we just get it over with? I know you’re unhappy with yourself, but now you’re blaming me for it, and making me feel like a useless husband, too. I’m sick and tired of you trying to push me into saying I don’t fancy you, so here you are: I don’t. Feel better now?”

I think it’s safe to say I don’t, and I feel even worse when Dan and I end up agreeing to separate. Happy New Year, Hannah Pinkman. Nicely done.

You can order your own copy in either paperback or e-book format (or audio) via Amazon UK now!

AD - PR Product. So excited to be joining in with my first #readalong for @tandemcollectiveuk - thanks so much! @jennycolganbooks has been one of my favourite authors for many years, and I had the opportunity to meet her a couple of years ago! The biscuits sound divine too and I'm keeping them away from my daughter!